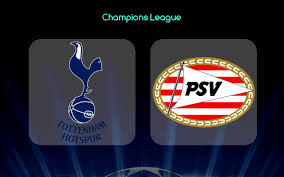 Tottenham Hotspur hosts PSV in a match from Group B of the Champions League. Let’s head out to Wembley and take a look at this game between these two sides.

These two teams are currently in the second half of the group standings – both have just 1 point won so far. Both teams suffered defeats against Barcelona and Inter, before making a 2-2 draw between each other in Eindhoven. Hirving Lozano and Luuk de Jong scored for the Dutch team, while Lucas Moura and Harry Kane scored for the English side.

The truth is that both teams needed to win this one in order to keep their chances for something more in this group. Both teams still have theoretical chances to progress, but they really need to start winning.

Tottenham are currently 4th in the Premier League standings with 24 points. Spurs have won four of their last five games in the league, losing only against the champion Manchester City. In their last match Spurs enjoyed a 3-2 against Wolverhampton Wanderers at the Molineux. Erik Lamela, Lucas Moura and Harry Kane scored for Mauricio Pochettino’s team.

PSV are dominating the Dutch Eredivisie in a dominant fashion. Mark van Bommel’s team is in an incredible run of 11 consecutive wins since the beginning of the season. Right now they are on the top of the table with 5 points advantage in front of the 2nd Ajax.

In their last game PSV enjoyed a 1-0 win at home against Vitesse. The only goal in the game was scored by Luuk de Jong in the second half. It was a tough, but very important win for Van Bommel’s team.

Maybe on paper Tottenham are favourites against PSV, but make no mistake – the Dutch team will give Spurs a real fight for their win.