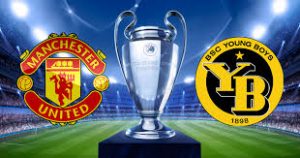 Manchester United faces Young Boys in a match from Group H of the UEFA Champions League at the Old Trafford. Let’s take a look at this clash at the Theatre of Dreams.

Manchester United are 2nd in this group with 7 points, being on 2 points behind the leader Juventus and 2 points ahead of the 3rd Valencia. In their previous game in the group United achieved an absolutely crucial win, winning against Juventus in Turin.

The Old Lady was the favourite in this game, but surprisingly Jose Mourinho’s side managed to pull it out at the Allianz Stadium. Cristiano Ronaldo opened the score for Juve, but in matter of three minutes Juan Mata and an own goal from Leonardo Bonucci made United victorious at a very difficult ground in Turin.

It’s not clear if Manchester United can beat Juventus for the first place in the group, but for them it’s going to be important to at least keep the 2nd spot and qualify for the 1/8-finals. That’s why United have to look for a win at any cost against Young Boys, because Valencia are just 2 points behind in the standings.

For Young Boys we can’t say much. The Swiss team is 4th in the standings with just 1 point won so far and a record of 1 draw and 3 losses. Clearly they are the outsider in this group and most probably they are going to finish 4nd in the group. But that’s completely normal – to be fair, the Swiss champion didn’t have a lot of luck with the draw, being in a very difficult group.

That’s our thoughts about the Champions League clash between Manchester United and Young Boys at the Old Trafford Stadium in Manchester. After winning against Juventus, United shall approach this match with a lot of confidence. Let’s see what they are going to do.