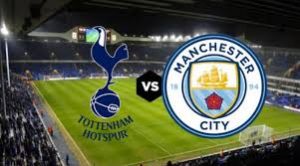 Tottenham Hotspur and Manchester City face each other in a first leg from the UEFA Champions League 1/4-finals. This is going to be a historical game, because for a first time in this competition, Tottenham will play at their new beautiful stadium in London. Will this give them some luck against the Cityzens? We shall wait until Tuesday night to see.

In the previous round of the competition Tottenham showed the best they can offer. Mauricio Pochettino’s team had a tough challenge against the talented team of Borussia Dortmund, but Spurs proved why they are called one of the best English teams at the moment. The Londoners didn’t concede a single goal for 180 minutes against Dortmund, winning the first leg with 3-0 and the second one in Germany with 1-0. If Tottenham offer this kind of performance again, they will have a great chance against Manchester City as well.

Tottenham are entering this game in a winning form. In their last Premier League game Spurs celebrated a 2-0 win over Crystal Palace at the new Tottenham Hotspur Stadium. Son Heung-Min and Christian Eriksen put the ball in the net for the home side.

Just like Tottenham, Manchester City are looking to reach their first Champions League final so far. During the 1/8-finals Pep Guardiola’s side showed some amazing form and scored 10 goals against Schalke 04 in two legs. It was particularly impressive what happened in the second game in Manchester, when City celebrated a 7-0 win over the Germans.

In their last game Manchester City reached the final of the FA Cup after a 1-0 win over Brighton & Hove Albion at the Wembley. Gabriel Jesus scored the only goal in the game after just 4 minutes of playing.

We can conclude that Tottenham and Manchester City shall offer us a pretty great spectacle on Tuesday night. But sadly, only one of these two wonderful teams can reach the 1/2-finals.