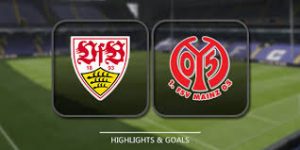 Stuttgart welcomes Mainz 05 in a game from the 18th round of the Bundesliga. Let’s take a look at this clash at the Mercedes-Benz-Arena.

At this moment Stuttgart are 16th in the Bundesliga standings with 14 points and a record of 4 wins, 2 draws and 11 defeats. In their last five games they won twice – against Augsburg and Hertha, but also suffered three defeats. At this moment it looks like Stuttgart will be locked in a difficult fight for survival. Right now they are holding the position for a relegation playoff, being just one point behind the 15th Augsburg and the safe zone.

In their last game Stuttgart suffered a 1-3 loss at home against Schalke 04. Nicolas Gonzalez scored Stuttgart’s only goal in the game, but Schalke managed to prevail with goals from Skrzybski, Sane and Kutucu. It was dissapointing for Markus Weinzierl’s team. For Stuttgart it was a second consecutive loss after the one against Wolfsburg.

Mainz 05 are 12th in the Bundesliga standings with 21 points won so far and a record of 5 wins, 6 draws and 6 defeats. In their last five games Mainz won just once – against Fortuna Dusseldorf, also doing three draws and suffering one defeat.

In their last game Mainz shared the points with Hoffenheim away from home for a 1-1 draw. Kerem Demirbay opened the score for Hoffe, but Jean Mateta equalized for Mainz. Until the end of the game Mainz managed to secure the point, being effective and precise in defense.

For Mainz 05 it was a second consecutive draw in the league after the one against Eintracht Frankfurt before this.

That’s what we had to say about the Bundesliga clash between Stuttgart and Mainz 05 at the Mercedes-Benz-Arena. We wish you good luck!