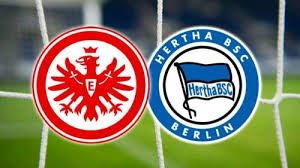 Trying to make another stop towards a Champions League qualification, Eintracht Frankfurt hosts Hertha BSC in a game from the 31th round of the Bundesliga. Let’s take a look.

Right now Eintracht remains in a good position to secure a place in the Top 4. The Europa League 1/2-finalists are currently 4th in the standings with 53 points, having 2 points advantage in front of the 5th Borussia M’gladbach. With 4 remaining rounds until the end of the league, Eintracht must keep this position and they will reach their goal.

In the last two games in the Bundesliga Adi Hutter’s players are having soem problems, though. After the surprising loss against Augsburg at home, Eintracht lost points again during the 1-1 draw with Wolfsburg away from home. Jonathan de Guzman gave Eintracht the lead with a goal in the 78th minute, but the Wolves equalised in the last few minutes with a goal from John Brooks. It was really dissapointing for the visitors.

In the same time Hertha are not playing for anything in the league anymore. The Old Lady is currently 11th in the standings with 36 points. The team from the capital have a record of 9 wins, 9 draws and 12 losses in the games played so far.

Hertha’s recent form is pretty terrible. In their last five games in the league, Pal Dardai’s players lost four times and only made one draw. This happened in the previous round, when Hertha only made a 0-0 draw against the outsider Hannover 96 in Berlin. Clearly Hertha are not even close to their best shape at the moment.

Hertha’s problems make Eintracht Frankfurt a clear favourite in this game. Eintracht are obligated to win in order to keep the 4th place in the standings and we believe that they will achieve this goal.