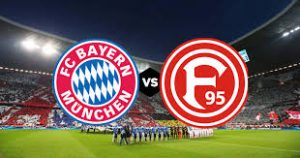 The champion Bayern Munich hosts Fortuna Dusseldorf in a match from the 12th round of the German Bundesliga. This game is going to be played on Saturday afternoon at the Allianz Arena in Munich. Let’s take a look.

Bayern are 5th in the Bundesliga standings right now, which is not just surprising, but also unacceptable for this club. Right now the Bavarians have 20 points won and they are on 7 points behind the leader Borussia Dortmund. Niko Kovac’ team have a record of 6 wins, 2 draws and 3 losses.

In the previous round Bayern suffered a huge dissapointment, losing the big derby against Borussia Dortmund at the Signal Iduna Park. The game ended with a 3-2 win for Dortmund. Robert Lewandowski scored a brace for the champions, but Dortmund prevailed with goals from Marco Reus and Paco Alcacer. For Borussia Dortmund it was a crucial win, while Bayern once again got a lot to think about.

For the manager Niko Kovac this is a first season in Munich, but some people are already talking that he might get sacked really soon. Bayern are performing below their standards and this is obvious. Let’s see if the club’s board is going to make some changes soon.

Fortuna Dusseldorf on the other hand are 17th in the Bundesliga standings with just 8 points won, being in the relegation zone of the league. They have a record of 2 wins, 2 draws and 7 losses. They were in a run of consecutive defeats, before beating Hertha BSC at home in the previous round. It was a great 4-1 win for Fortuna, which gave them some boost in the fight against relegation.

Bayern Munich are the big favourite against Fortuna Dusseldorf, of course. Especially at home. The Bavarians need to be flawless in order to catch up with Borussia Dortmund at the top.